A limited series of T-shirts of the legendary MiG 21 fighter, flying over the entire Eastern Bloc for over 30 years.

4 generation of pilots and technicians has served on this A/C and it became a flying legend.

The Mikoyan-Gurevich MiG-21 (Russian: Микоян и Гуревич МиГ-21; NATO reporting name: Fishbed) is a supersonic jet fighter and interceptor aircraft, designed by the Mikoyan-Gurevich Design Bureau in the Soviet Union. It was popularly nicknamed "balalaika", from the aircraft's planform-view resemblance to the Russian stringed musical instrument or ołówek (English: pencil) by Polish pilots due to the shape of its fuselage.[3]

Approximately 60 countries over four continents have flown the MiG-21, and it still serves many nations six decades after its maiden flight. It made aviation records, became the most-produced supersonic jet aircraft in aviation history, the most-produced combat aircraft since the Korean War and previously the longest production run of a combat aircraft (now exceeded by both the McDonnell Douglas F-15 Eagle and General Dynamics F-16 Fighting Falcon).

he MiG-21 jet fighter was a continuation of Soviet jet fighters, starting with the subsonic MiG-15 and MiG-17, and the supersonic MiG-19. A number of experimental Mach 2 Soviet designs were based on nose intakes with either swept-back wings, such as the Sukhoi Su-7, or tailed deltas, of which the MiG-21 would be the most successful.

Development of what would become the MiG-21 began in the early 1950s, when Mikoyan OKB finished a preliminary design study for a prototype designated Ye-1 in 1954. This project was very quickly reworked when it was determined that the planned engine was underpowered; the redesign led to the second prototype, the Ye-2. Both these and other early prototypes featured swept wings. The first prototype with delta wings as found on production variants was the Ye-4. It made its maiden flight on 16 June 1955 and its first public appearance during the Soviet Aviation Day display at Moscow's Tushino airfield in July 1956.

In the West, due to the lack of available information, early details of the MiG-21 often were confused with those of similar Soviet fighters of the era. In one instance, Jane's All the World's Aircraft 1960–1961 listed the "Fishbed" as a Sukhoi design and used an illustration of the Su-9 'Fishpot'.

The MiG-21 was the first successful Soviet aircraft combining fighter and interceptor characteristics in a single aircraft. It was a lightweight fighter, achieving Mach 2 with a relatively low-powered afterburning turbojet, and is thus comparable to the American Lockheed F-104 Starfighter and Northrop F-5 Freedom Fighter and the French Dassault Mirage III.[1] Its basic layout was used for numerous other Soviet designs; delta-winged aircraft included Su-9interceptor and the fast E-150 prototype from MiG bureau while the mass-produced successful front fighter Su-7 and Mikoyan's I-75 experimental interceptor combined a similar fuselage shape with swept-back wings. However, the characteristic layout with the shock cone and front air intake did not see widespread use outside the USSR and finally proved to have limited development potential, mainly because of the very small space available for the radar.

Like many aircraft designed as interceptors, the MiG-21 had a short range. This was exacerbated by the poor placement of the internal fuel tanks ahead of the centre of gravity. As the internal fuel was consumed, the center of gravity would shift rearward beyond acceptable parameters. This had the effect of making the plane statically unstable to the point of being difficult to control, resulting in an endurance of only 45 minutes in clean condition. This can be somewhat countered by carrying fuel in external tanks closer to the center of gravity. The Chinese variants somewhat improved the internal fuel tank layout (also second generation of Soviet variants), and also carry significantly larger external fuel tanks to counter this issue.[4] Additionally, when more than half the fuel was used up, violent maneuvers prevented fuel from flowing into the engine (questionable), thereby causing it to shut down in flight. This increased the risk of tank implosions (MiG-21 had tanks pressurized with air from the engine's compressor), a problem inherited from the MiG-15, MiG-17 and MiG-19.[5] The short endurance and low fuel capacity of the MiG-21F, PF, PFM, S/SM and M/MF variants—though each had a somewhat greater fuel capacity than its predecessor—led to the development of the MT and SMT variants. These had an increased range of 250 km (155 mi) compared to the MiG-21SM, but at the cost of worsening all other performance figures, such as a lower service ceiling and slower time to altitude.[1] 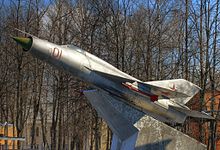 The delta wing, while excellent for a fast-climbing interceptor, meant any form of turning combat led to a rapid loss of speed. However, the light loading of the aircraft could mean that a climb rate of 235 m/s (46,250 ft/min) was possible with a combat-loaded MiG-21bis,[1] not far short of the performance of the later F-16A. Given a skilled pilot and capable missiles, it could give a good account of itself against contemporary fighters. Its G-limits were increased from +7Gs in initial variants to +8.5Gs in the latest variants.[6] It was replaced by the newer variable-geometry MiG-23 and MiG-27 for ground support duties. However, not until the MiG-29 would the Soviet Union ultimately replace the MiG-21 as a maneuvering dogfighter to counter new American air superiority types.

The MiG-21 was exported widely and remains in use. The aircraft's simple controls, engine, weapons, and avionics were typical of Soviet-era military designs. The use of a tail with the delta wing aids stability and control at the extremes of the flight envelope, enhancing safety for lower-skilled pilots; this in turn enhanced its marketability in exports to developing countries with limited training programs and restricted pilot pools. While technologically inferior to the more advanced fighters it often faced, low production and maintenance costs made it a favorite of nations buying Eastern Bloc military hardware. Several Russian, Israeli and Romanian firms have begun to offer upgrade packages to MiG-21 operators, designed to bring the aircraft up to a modern standard, with greatly upgraded avionics and armaments.[1] 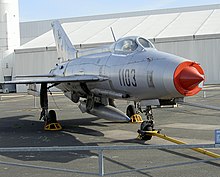 A total of 10,645 aircraft were built in the USSR. They were produced in three factories: AZ 30[N 1] (3,203 aircraft) in Moscow (also known as MMZ Znamya Truda), GAZ 21 (5,765 aircraft) in Gorky [N 2] and TAZ 31 (1,678 aircraft) in Tbilisi. Generally, Gorky built single-seaters for the Soviet forces. Moscow constructed single-seaters for export, and Tbilisi manufactured the twin-seaters both for export and the USSR, though there were exceptions. The MiG-21R and MiG-21bis for export and for the USSR were built in Gorky, 17 single-seaters were helmed in Tbilisi (MiG-21 and MiG-21F), the MiG-21MF was first constructed in Moscow and then Gorky, and the MiG-21U was built in Moscow as well as in Tbilisi.[1]

Be the first to write your review!

30 other products in the same category: